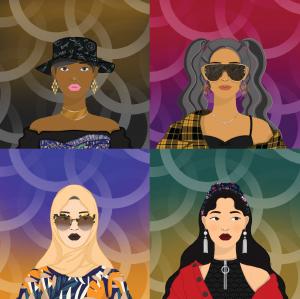 The project is slated to be released in April 2022 and addresses the imperative need to create an inclusive, safe, and diverse society.

TORONTO, ONTARIO, CANADA, March 12, 2022 /EINPresswire.com/ — Some people take the chance to leave their home country and settle abroad to pursue better opportunities, a better quality of life, or simply because they want to embrace the idea of becoming a global citizen. However, a move this big, leaving their family behind, their roots back, is not easy.

It needs determination, perseverance and most importantly, an open mindset to withstand the challenges they may face, but no one is prepared to face racism and hate attacks. Every immigration story is different; many a time tinted with discrimination and racial profiling.

While talking about the Asian community and rising hate crimes, Grace Kim, a Korean Canadian living in Toronto and the founder of the Asian Identity NFT project, shares, “While the world is becoming receptive to the concept of global citizenship, the Asian community has been a target for hate crimes for many years. The Covid-19 pandemic has made it worse, with a considerable rise in hate attacks against the Asians.”

As per a news report, the anti-Asian crime rate increased by over 600% in some Canadian cities in 2020. These statistics show how societies create racial stereotypes, which are also reflected in their actions.

Grace further adds, “The reason I started the Asian Identity NFT project is to empower the Asian communities settled abroad, celebrate their uniqueness, and give them a platform to proudly own their identity – while bridging the wide gap that now exists in the world. This project acknowledges Asians settled across the globe, in the United States, the United Kingdom, Australia, Europe etc. We all need to be seen and feel inclusive and safe.”

Every year in Canada, the month of May is celebrated as Asian Heritage Month, but the celebrations have been overshadowed in the last few years, given the rise in racism. “Asian Identity NFT is my way of acknowledging the achievements and contributions of Asians who moved to Canada and called it home,” Grace states.

Grace, who came to Toronto from South Korea as a teenager with her parents, has faced her share of racism in a country that embodies diversity. When she finished university, her parents moved back to Korea, and she decided to stay back in Canada – all alone.

As she was trying to find her place, she realized how crucial it is to have a community that believes in you and supports you wholeheartedly. Now, married to a Korean Canadian and a mother of three kids, Grace knows first-hand how it feels to be culturally displaced, which is the inspiration behind Asian Identity.

“This project is dedicated to Asians living abroad, but our community is open and welcoming to anyone who opposes racism and has a humanitarian mind,” With her collection of 10,000 uniquely designed, beautiful Asians rising on the Ethereum blockchain, she hopes that it will help build a unified society that values friendship and partnership without racial prejudice. The NFTs are based on more than 400 hand-drawn traits with a mixture of modern and cultural items.

According to Grace, humankind must come together to build a society that values diversity and truly believes in creating cultural equity. “As a Korean Canadian, we have ensured that we stay connected to our roots, our heritage and pass it on to our kids,” she says. “We are the connection between what they call home in Canada and their legacy in Korea, and it is imperative to disseminate those values and beliefs from the very beginning. The same is true for thousands of immigrants who decide to move to different parts of the world but make a conscious effort to remain connected to their cultures.”

Grace Kim and her husband, Jason make daily efforts to keep their kids in tune with their heritage and one of the ways they have decided to keep this going is through food. “We try to make sure that we eat at least one Korean meal a day at home. Food is an incredible way to establish a strong connection with one’s culture.”

This project is an opportunity to rethink race, gender, and prejudice and a chance to create a culturally sensitive society.

Grace Kim is the founder and artist at Asian Identity, a new NFT project scheduled for launch in April 2022. She is a Korean Canadian living in Toronto with her husband and three children.