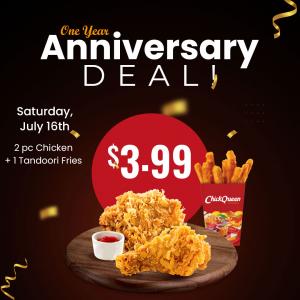 ChickQueen Canada wants to mark their 1- year anniversary with an offer. On July 16th, ChickQueen will sell two pieces of chicken & Tandoori fries for $3.99.

but we won’t lose sight of what makes ChickQueen special. A delicious handcrafted menu and genuine hospitality are who we are – and always will be.”

MISSISSAUGA, ONTARIO, CANADA, July 13, 2022 /EINPresswire.com/ — ChickQueen Canada wants to mark their 1- year anniversary with a special offer. On July 16th, ChickQueen will sell two pieces of its famous bone-in-chicken with Tandoori fries for only $3.99.

Last July, ChickQueen opened its 1st location in Canada. It was the first location in North America. The first customer arrived outside its doors hours before its 11 am opening. Despite the hot weather, a steady stream of people joined the queue into the early hours of the ­morning.

By the time the doors opened in the morning, there were people lined up around the block for Tandoori Sandwich, Royal Crunchy, Tandoori Bites and other middle eastern-influenced items on the eclectic menu. Arguably, people haven’t been this excited about something from the middle east.

The growth of ChickQueen has been one of the biggest global food trends of the last 2 years– new stores opened in the UAE last year, while 20 new outlets were unveiled abroad. It is now the largest halal fast-food chain globally.

ChickQueen is known for its famous chicken and tandoori flavors that celebrate the chain’s middle eastern roots. For more than 25 years, ChickQueen has continued to follow traditional recipes and techniques that include battering and breading chicken by hand before starting the 24-hour marination process that gives each piece its crunch.

ChickQueen is part of Chicking group which has 200 plus locations, including several locations in the UAE. By 2025, the brand will surpass 300 locations internationally– not to mention North America expansion, already in the works.

What will the next 5 years bring? Amir continues, “More growth and more innovation for sure,” he states, “but we won’t lose sight of what makes ChickQueen special. A delicious handcrafted menu and genuine hospitality are who we are – and always will be.”