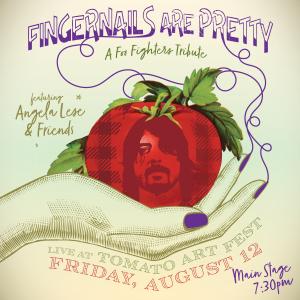 Angela Lese is an awesome human, drummer, and hustler. When she came to me with the idea of a femme Foo Fighters tribute night I said, ‘F— yeah!’ It’s gonna be incredible to watch this happen!”

NASHVILLE, TENN., UNITED STATES, August 4, 2022 /EINPresswire.com/ — On August 12th, Fingernails Are Pretty will have their debut live performance on the main stage at the 19th Annual Tomato Art Fest in East Nashville, TN. The all-femme supergroup and Foo Fighters tribute band was put together by rock drummer and founder/former member of The Dead Deads, Angela Lese, and features a cast of rotating members from locally known acts such as Ariel from Icon for Hire and Coco from Winona Fighter, amongst several others. Inspired to pay tribute to her favorite drummer, Taylor Hawkins after his recent and untimely death, Lese formed Fingernails Are Pretty to feature all female/trans/non-binary band members and exist for the purpose of lifting up the voices of minorities of all kinds.

A passion project for Lese, the drummer likens the supergroup’s formation to shedding a light on the sometimes exclusive Nashville’s “boy’s club” while also giving other women in the rock genre a turn in the spotlight. “I’ve always wanted to start a Foo Fighters tribute band with other females, trans girls and non-binary folks included, especially because we aren’t afforded as many opportunities in the music industry,” says Lese. “Once my drumming idol, Taylor Hawkins passed away I felt like this passion project could be a sincere way to thank him for the years of inspiration while helping showcase some of the incredible but under-served talents in this town.”

Energetic and explosive in her performance, Lese has an extreme work ethic and is widely considered one of the best drummers in Nashville. According to Rachel Bolan of Skid Row, “Angie’s style is straightforward and ferocious. Her killer meter and versatility are why she stays so busy.” For over a decade Lese’s drumming career has ranged from extensive touring, live performances, and studio work. Known for being an active member of the local music community and advocate for women in music, Lese is proud to be partnering with the legendary and locally beloved Tomato Art Fest for Fingernails Are Pretty’s debut live performance.

“Angela Lese is an awesome human, drummer, and hustler,” says Mike Grimes, owner of Grimey’s, The Basement, The Basement East, and Curator of 2022’s Tomato Art Fest entertainment. “When she came to me with the idea of a femme Foo Fighters tribute night I said, ‘F— yeah!’. Taylor Hawkins is one of Angela’s biggest influences and it’s gonna be incredible to watch this happen!”

The ever-changing, all-femme ensemble includes members from both veteran and emerging rock acts alike. Lese’s goal in forming Fingernails Are Pretty is to highlight individual talents as well as display the strength that comes from unity, especially in today’s divisive times. “While revisiting these [Foo Fighter] songs that I grew up with, some of them have been hitting me in the feels in a brand new way now that I’m an adult,” says Vera Bloom, one of the supergroup’s prominent guest singers. “Also, because I am a woman in today’s political climate.”

Residing in Nashville, TN, home to the world’s greatest musicians, Lese has toured as a professional drummer extensively including several national tours and numerous rock cruises with the likes of Kalie Shorr, The Dead Deads, The Raelyn Nelson Band, Taco Mouth, amongst several others. Additionally, she has shared the stage and worked with many internationally known artists such as Evanescence, Tom Petersson (Cheap Trick), Halestorm, All Time Low, Alter Bridge, Stone Sour, Bush, Page Hamilton, and many more.

Rock fans in the Nashville area can catch Fingernails Are Pretty’s debut live performance at 7:30 pm on August 12th at the Tomato Art Fest in Five Points. To connect with Angela Lese and find out more about her for-hire/touring availability visit www.angelalese.com and follow @tamachick on social media.