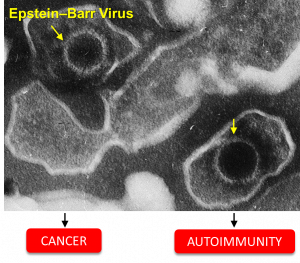 Epstein–Barr Virus: Silencing the Enemy within 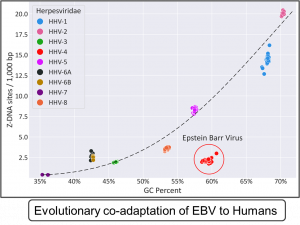 The EBV genome show strong selection against genetic elements called flipons that are more frequent in other types of Herpes viruses. 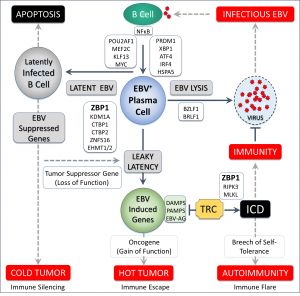 Epstein-Barr virus (EBV) infects most humans and is a major cause of cancer and autoimmune disease. A genomic analysis reveals novel mechanisms behind long EBV infection

Epstein-Barr virus (EBV) infects most humans and is a major cause of cancer and autoimmune disease. A genomic analysis reveals novel mechanisms behind long EBV

An effective vaccine to prevent Epstein-Barr Virus infection is really needed, one that we can develop with existing technologies”

CHARLESTOWN, MA, UNITED STATES, March 12, 2022 /EINPresswire.com/ — In a paper published on line today, scientists at InsideOutBio and the Higher School of Economics and Computer Science examine mechanisms underlying chronic persistence of Epstein-Barr Virus(EBV) in humans, sometimes referred to as long EBV. EBV infects most humans and is a major cause of cancer and autoimmune disease.

The paper is entitled “Mono a Mano: ZBP1’s Love–Hate Relationship with the Kissing Virus”.

By examining the genomes of different types of Herpesviruses, Dr. Herbert and Poptsova and Mr. Fedorov noticed that genetic elements called flipons were under-represented in the EBV DNA compared to other herpesviruses. Flipons adopt the non-classical Z-DNA structure that has a left-handed helix rather than the right-handed twist found in the well-known B-DNA conformer. The author’s findings are consistent with a long period of coadaptation between virus and host. A trade-off allows the virus to persist while minimizing the risk of disease outcomes such as death, autoimmunity and cancer.

The authors address the role of flipons in the viral co-adaptation. Normally in acute viral infections, Z-DNA and Z-RNA formation is detected and triggers pathways that lead to cell death. Subsequent inflammatory response drive the production of immunity against the virus. In EBV, the authors outline a different pathway activated by Z-DNA that suppresses readout from the viral genome, squelching viral gene expression. Rather than fighting this response, EBV exploits it to enter a state of latency, where the virus can replicate along with the host but otherwise is quiescent.

It is only when latency breaks down that the virus produces infectious particles and inflammatory flares. In cases when suppression of the virus is only partial, a state the authors refer to as leaky latency, the chances of chronic diseases developing increase as the reservoir of latently infected cells is never fully depleted. In other cases, the suppression of viral genes may extend to host genes such as tumor suppressor genes, increasing the chances of cancer developing.

The authors discuss treatment options based on the mechanisms described and strongly advocate for childhood vaccination against Epstein–Barr virus.

InsideOutBio is an early-stage biotech company developing therapeutics for the treatment of cancer The access to the enormous databases created by collaborative international efforts has helped the InsideOutBio scientists make fundamental discoveries such as those reported by Dr. Herbert, Mr. Fed0rov and Dr. Poptsova in the paper. Previously Dr. Herbert discovered a family of proteins that bind the left-handed Z-DNA conformation and performed pioneering human genetic studies in the Framingham Heart Study. InsideOutBio is privately held.

Aleksandr Fedorov and Maria Poptsova are supported by the Basic Research Program of the National Research University Higher School of Economics, for which Dr. Herbert is an International Supervisor. This research received no external funding.