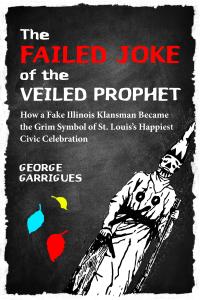 “Failed Joke” is available in print and ebook format. 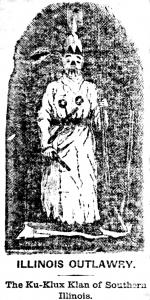 He looks like evil itself, but he’s just posing for a photo.

If this hooded creep was so frightful, why did he keep company with a bug, a lion, and a lady with a cup of hot chocolate?

When will that stupid affair be over?”

ST. LOUIS, MISSOURI, UNITED STATES, March 13, 2022 /EINPresswire.com/ — A new book, “The Failed Joke of the Veiled Prophet” by George Garrigues, will be introduced to Midwest historians on March 16-18.

That will be at the Missouri Conference on History in the Capitol Plaza Hotel, Jefferson City, Missouri.

The book is subtitled “How a Fake Illinois Klansman Became the Grim Symbol of St. Louis’s Happiest Civic Celebration.” It shatters a story that has grown up within the past twenty years about the Veiled Prophet, a symbolic figure honored yearly in St. Louis since 1878.

Garrigues, a journalist and retired university department chair, explained in a press release:

“The Veiled Prophet Parade was a bash in St Louis that brought tens of thousands of visitors to the city each year. In the evening, there was always a Veiled Prophet Ball led by a costumed and hooded man who crowned a young society woman as a ‘Queen of Love and Beauty.’

“Over the decades, the idea got around that this invented Veiled Prophet was somehow connected with the Ku Klux Klan. That stemmed from a woodcut printed in the Missouri Republican newspaper in 1878. It showed a hooded man gripping a pistol, holding a shotgun and seemingly itching to slam anybody with that truncheon in his belt. He was surely a nightmare vision of a racist killer.”

The Snopes fact-checking site claimed falsely in June 2020 that: The Veiled Prophet Ball “is affiliated with an organization that has a racist history, including ties to the Ku Klux Klan.”

The Atlantic magazine earlier opined that the figure was “meant to serve as a sort of empty shell that contained the accumulated privilege and power of the status quo.” A Harvard professor went even farther afield. In 2020 his 518-page book related that: “Clad in a white hood and robes, the ‘Veiled Prophet’ first patrolled the streets of St. Louis on the night of October 5, 1878, a revolver in one hand, a rifle in the other, a bowie knife looped through his belt.”

“Just last year, vidiots with computers found the image online and cast it as a photobomb alongside sitcom actress Ellie Kemper in reproachful YouTube videos because two decades earlier she had been a Veiled Prophet Queen at the age of nineteen. A Confederate flag defaced one of them, which is pretty lame considering this photograph was made in Illinois, never a part of the Confederacy.”

“The Failed Joke of the Veiled Prophet,” Garrigues said, demonstrates that the figure “was simply a man who had been set up by a journalist to pose for a photo in a Klansman’s outfit in 1875, three years before the first Veiled Prophet Parade.”

He gave this chronology:

On Tuesday morning, August 17, 1875, a gang of Southern Illinois Klansmen rode out to terrorize the home of a prominent Benton County politician; they were met by a sheriff and his posse. Shotgun blasts sent them away, some badly wounded. Many were captured.

St. Louis reporter Joseph A. Dacus arrived to cover the story on Wednesday evening, August 18, 1875. He had a camera with him, and he made four images of a man whom he posed standing with Klan weapons.

One of the photos was printed with the caption “Illinois Outlawry” the next Monday, August 23, in the St. Louis Republican newspaper.

Three years later, an unidentified Republican journalist put together a light-hearted article for Sunday, October 6, 1878. It poked fun at the brand-new Veiled Prophet Parade, which was to step out on St. Louis streets for the very first time that week. He illustrated it with sixteen whimsical pictures, including the fake Klansman image “which actually was not very whimsical,” Garrigues recounted, “but more of a slam at parade organizers.”

“Since the year 2000, though,” he continued, “that decades-old article, with the photo, has been completely misunderstood. My book is designed to cure any ignorance concerning the origin of the Veiled Prophet myth. It’s not an academic work: I offer no footnotes, spurious or otherwise. I’ve learned that ivory-tower writing can’t always be trusted. Remember the journalistic alarm bell: ‘If your mother says she loves you, check it out!’”

“Failed Joke” covers the history of the Veiled Prophet phenomenon, beginning with Irish poet Thomas Moore in 1817, though tableau vivants in Prussia in 1821 into its 1878 revival with the first St. Louis parade and ball. The book introduces the Slayback brothers, Alonzo (a Confederate colonel who dreamed up the plot for the parade) and Charles (who got out of fighting for the Union by paying somebody to take his place).

It recounts the startling history of a Ku Klux Klan offshoot gang in Southern Illinois and tells what happened to its members once they were captured and put into jail. (Almost nothing.)

The book can be ordered online or at your bookstore. Go to