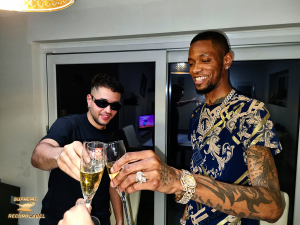 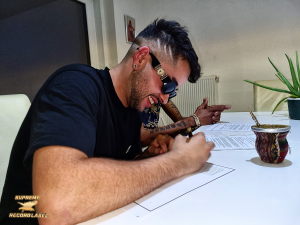 Born and raised in the infamous neighborhood of Añaza, on the beautiful island of Tenerife, Spain, Boriko has built respectable street rep by showcasing his exceptional talent in freestyling and singing for 13 years.

At 18, he moved to the capital to live with his aunt and decided he was going to make it big in the industry. His aunt was one of the main pillars to his lifestyle change because she believed and had faith in him. However, in an unfortunate turn of events, his aunt passed when Boriko was just 20 years old. After finishing his studies, he moved to the Netherlands.

The stage name “Boriko” came from his grandfather which was passed on to his father as well. It was a name that upheld a tribe in Guinea Ecuatorial, and held a great deal of significance for Boriko.

Supreme Record Label CEO, Adam Kelman, is excited to have the label represent Boriko as their newest artist, stating “He puts his soul into his artwork. By creating his music, so does the music create himself”.

As the CEO of several companies, Kelman holds Supreme Record Label most sacred. He believes in the importance of putting one’s faith, and support in young artists today to help them manifest their dreams. That’s what makes Supreme Record Label special. Kelman likens Boriko to a fictional character named “Choco” played by Reggaeton star Tego Calderon in the 2007 film “Illegal Tender”. As a young man, Choco was a “gentle hustler”, who grew up wise as he was able to quickly discern his right path to success and was able to live an incredible life through his passion in creating music.

“Sometimes you have to give a little to gain more, and also maintain the goals and visions we want to achieve.” Kelman states. He has always had an interest for latin music such as reggaeton and moombahton, which was what ultimately led him to Boriko. He recalls watching one of Boriko’s music videos for the first time, and already wanting to meet him personally after just seeing the first 10 seconds of the clip.

Supreme Record Label is coming out very strong this year as they now proudly represent two of their strongest artists: Boriko for reggaeton, and Miss Cheri for dancehall and many more genres. This year, Kelman is looking to focus largely on developing both artists’ brands and maximize their potential for growth.

Supreme Record Label will be releasing two highly anticipated official music videos from Boriko and Miss Cheri very soon. Fans will no doubt love their new material: hot new tracks, amazing choreography, filmed at the most stunning locations. As their highly driven CEO says, “We don’t swim with the sharks, we fly above eagles”.

To find out more about Supreme Record Label, visit www.SupremeRecordLabel.com, or check out the social media links below.