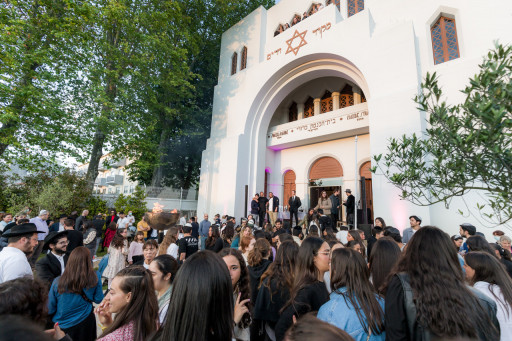 The Jewish Community of Porto filed a complaint to the European Public Prosecutor's Office alleging an antisemitic conspiracy against the wealthy members of the Portuguese Jewish community and the strongest Jewish organization in Portugal - harming the financial interests of the European Union. The complaint was submitted with the assistance of lawyers from Portugal, the USA and Israel and the European Jewish Association (EJA).

The entire complaint has been bound into a book under the title "The First Major Antisemitic Conspiracy of the 21st Century", which can be downloaded for free: http://firstmajorconspiracy.com

According to the Jewish Community of Porto, "A group of people among the Portuguese elites united executive, legislative, judiciary and media powers in a violent antisemitic conspiracy. The objectives of the conspiracy were to destroy the Sephardic Law against a backdrop of terror, so that no one could come forward to defend that law; to reject politically the large influx of Israeli citizens with an interest in Portuguese nationality; and to produce a 'criminal lawsuit' based on anonymous denunciations that aim to destroy the Jewish businessman Patrick Drahi, wealthy Jews of Portuguese origin and the Jewish Community of Porto."

"The European Public Prosecutor's Office has no legal legitimacy to investigate cases of antisemitism, but in this case, there are some signs of corruption on the part of ruling elites and this harms all citizens of Europe," says the President of the Jewish Community in Porto, Gabriel Senderowicz.

In a scathing 113-page complaint submitted last week to the European Public Prosecutor's Office (EPPO), the Jewish Community of Porto states that "conspirators used a criminal organization dedicated to nocturnal raids on private homes and law offices of people supposedly connected to Patrick Drahi, and also used false accusations of drug trafficking and fraud, and 'anonymous' sources who have already been convicted in court for defamation of members and friends of the Jewish Community of Porto."

The complaint mentions the destructive role of some politicians, influencers, and also journalists from several newspapers and TV stations in Portugal.

"Week after week, entire families were subject to libellous exposure in the newspapers, and slander on television, all based on anonymous denunciations and anonymous sources. No one escaped this type of Inquisition-style 'purification,'" reads the complaint.

"'Operation Open Door', which was presented to the world as the sale of passports by a rabbinate who acted for money, is after all a 'Palestinian case' that attacks Jewish Israelis, wealthy Jews and strong Jewish institutes connected with Portugal," the complaints concludes.

Original Source: The Jewish Community of Porto Denounces an 'Antisemitic Conspiracy' at the European Public Prosecutor's Office and in a Book