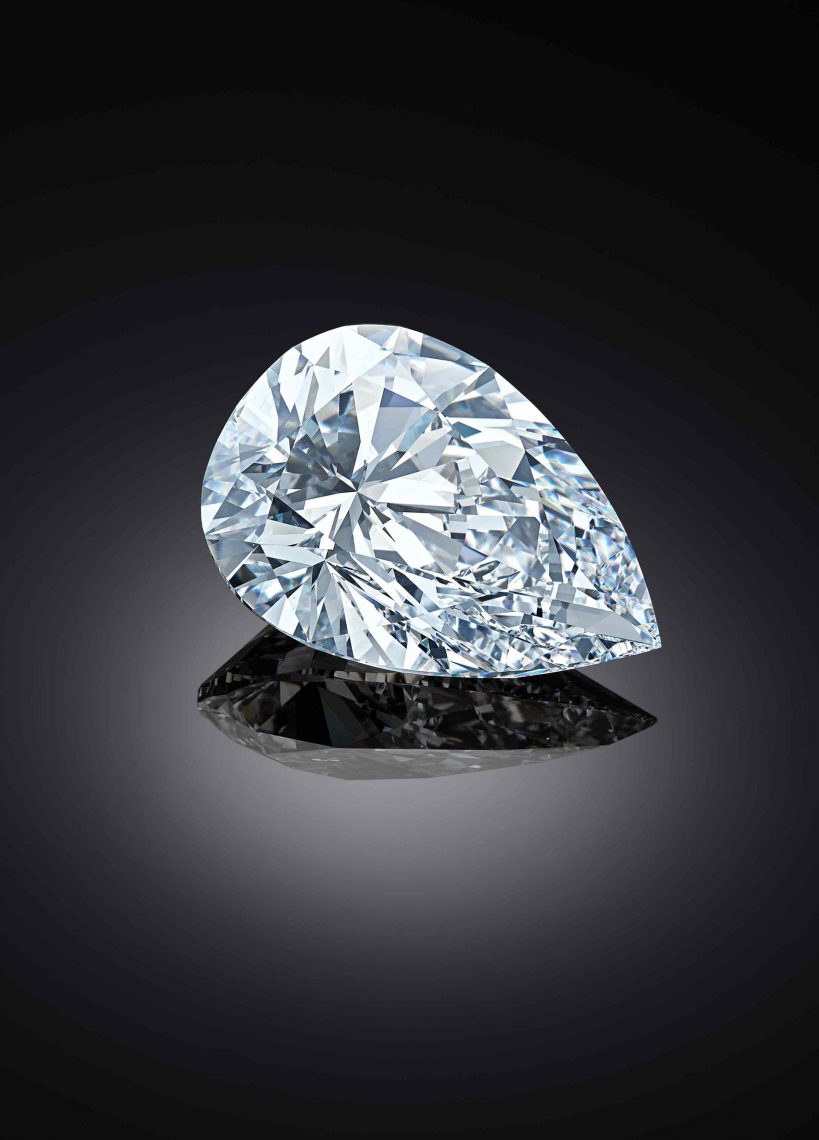 Today at Sotheby’s in New York, one of earth’s rarest and most coveted wonders – a highly important 101.41-carat D Colour Internally Flawless Pear-Shaped Diamond – sold for $13 million. The result places the stone among the highest prices ever achieved for a D color, Flawless or Internally Flawless diamond over 100 carats at auction.

Previously called the “Juno Diamond”, the magnificent stone was purchased over the phone by a private collector in Asia, who, shortly after the sale, renamed the jewel the “Claire G Diamond,” in loving dedication to his wife.

The “Claire G Diamond” was the star lot in today’s sale of “Magnificent Jewels,” which achieved a total of $52 million. Together with this week’s sale of Fine Jewels, Sotheby’s worldwide jewelry auctions have surpassed $230 million to date – an increase of 14% over the same period in 2021.

Quig Bruning, Head of Jewels, Sotheby’s Americas, said: “We are thrilled to see this exceptional diamond achieve such a strong result – confirmation that there’s ongoing demand from collectors at the highest levels of the market. This diamond captivated clients around the world through our extensive travels this spring, but it was a particular privilege to offer it at our global headquarters, where it now ranks among the top five jewels sold in Sotheby’s New York salesroom. Including today’s result, only five perfect pear-shaped diamonds weighing over 100 carats have sold at auction, of which Sotheby’s has sold four.”

Catharine Becket, Head of Sotheby’s Magnificent Jewels sale in New York, commented: “When curating our Magnificent Jewels sales, we’re continually on the hunt for not only extraordinary, timeless designs but also for of-the-moment jewels and gemstones that signal growth areas in the market. In particular, it’s been thrilling to witness the increase in our clients’ appetite for stones beyond the standard canon of diamonds, sapphires, rubies and emeralds, and to see the evolution in their appreciation for specimen stones, such as the Paraiba Tourmaline and Diamond Pendant Necklace, which sold for an incredible $1.2 million. We also saw exceptional results for signed jewels by the iconic maisons, including a Mystery-Set Ruby Holly Leaf brooch by Van Cleef & Arpels that sold for nearly $1 million.”

The “Claire G Diamond” has achieved superlative gradings in both colour (D Colour – the highest grade for a white diamond) and clarity (Internally Flawless). As with the famous Cullinan I and Koh-i-noor diamonds, which are part of the British Crown Jewels, the stone is part of the rare subgroup comprising less than 2% of all gem diamonds, known as Type IIa. Diamonds in this category are the most chemically pure, lending them exceptional optical transparency.