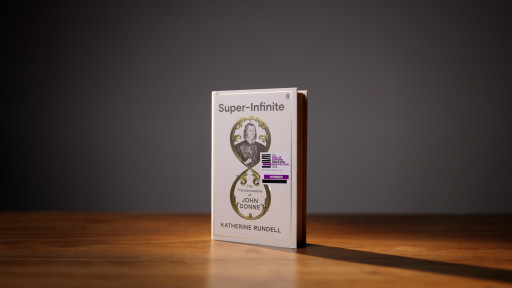 Super-Infinite: The Transformations of John Donne by Katherine Rundell has been named winner of the Baillie Gifford Prize for Non-Fiction 2022. The winner was announced by Chair of Judges Caroline Sanderson at a ceremony hosted at the Science Museum and generously supported by The Blavatnik Family Foundation. The announcement was streamed to readers around the world via the Baillie Gifford Prize social media channels.

Super-Infinite: The Transformations of John Donne gives readers a window into the little-known myriad lives the poet John Donne lived. He was a scholar of law, a maritime adventurer, an MP, a priest, the Dean of St Paul's Cathedral - and perhaps the greatest love poet in the history of the English language. Standout scholar Katherine Rundell shows readers the many sides of his life, his obsessions, his blazing words, and his tempestuous Elizabethan times - unveiling Donne as the most remarkable mind and as a lesson in living.

Katherine Rundell is a Fellow of All Souls College, Oxford, where she works on Renaissance literature. Her bestselling books for children have been translated into more than 30 languages and have won multiple awards. Rundell is also the author of a book for adults, Why You Should Read Children's Books, Even Though You Are So Old and Wise. She has written for, among others, the London Review of Books, the Times Literary Supplement, the New York Review of Books and The New York Times, largely about books, though sometimes about animals, night climbing and tightrope walking.

The Baillie Gifford Prize aims to recognise and reward the best of non-fiction and is open to authors of any nationality. It covers all non-fiction in the areas of current affairs, history, politics, science, sport, travel, biography, autobiography and the arts. As the winner, Rundell will receive £50,000 along with the £1,000 given to each of the shortlisted authors. Last year's winner was Patrick Radden Keefe for Empire of Pain, which became a Sunday Times bestseller.

Super-Infinite: The Transformations of John Donne was chosen by this year's judging panel: writer and Associate Editor of The Bookseller, Caroline Sanderson (chair); writer and science journalist, Laura Spinney; critic and writer for The Observer, Rachel Cooke; BBC journalist and presenter, Clive Myrie; author and New Yorker writer, Samanth Subramanian; and critic and broadcaster, Georgina Godwin. Their selection was made from 362 books published between 1 Nov. 2021 and 31 Oct. 2022.

The other titles on this year's shortlist were:

READ SMART, the Baillie Gifford Prize for Non-Fiction's podcast, will release an episode devoted to the winner of the 2022 award, hosted by Razia Iqbal and featuring Katherine Rundell. It will be available on Thursday, 24 Nov.

For information about the prize, visit:  www.thebailliegiffordprize.co.uk

Images of the winning author and book are available to download here.

This folder is being updated with images from the ceremony.