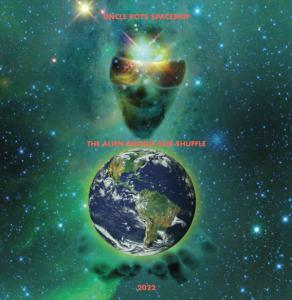 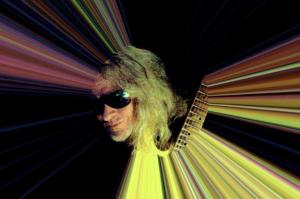 ASHEVILLE, NC, USA, September 16, 2022 /EINPresswire.com/ — Returning from the cosmos, UNCLE ROYS SPACESHIP, who is, UNCLE ROY aka ROY LEONARD HERMAN, will release a NEW SINGLE to the universe! On, SEPTEMBER 30, 2022, “THE ALIEN BOOGIE DUB SHUFFLE,” a crispy, uptempo, boogie rock funky instrumental, will launch across the world! The tune will make you move, groove & give you five minutes of happy ears & feet!

With an already, cool range of high energy, electric guitar styles found on the five, crafty instrumental tunes on UNCLE ROYS SPACESHIP’s first release a few light years ago, the EP “HOW DO WE GET TO EARTH?,” UNCLE ROY adds another music style to this new single, “THE ALIEN BOOGIE DUB SHUFFLE.” With sweet harmony guitars, surrounded by a tight, pumping rhythm section, funky guitars & keyboards that groove, there is a really nice blend of rock, funk and boogie, that fuses into a nice playlist addition, airwave friendly good feeling instrumental! Those music styles shine out & give “THE ALIEN BOOGIE DUB SHUFFLE” a good cheer, good vibe, party feeling!

The new single can be pre-saved at SPOTIFY prior to the release date by going to this link: https://distrokid.com/hyperfollow/uncleroysspaceship/the-alien-boogie-dub-shuffle

Here’s what UNCLE ROY has to say about the origin of, “THE ALIEN BOOGIE DUB SHUFFLE.”: “Hello Third Rockers from the Sun! I’d love to tell you about, ‘The Alien Boogie Dub Shuffle!” While cruising through the galaxy on my way to see some friends, I needed to hear some flying music filled with groove. I needed some sound waves to fill the airwaves. I was feeling funky and rocky at the same time! So, I put on some of those amazing sounds created by a few of the legends of Earth’s phenomenal musical legacy. Sly and the Family Stone, Herbie Hancock and the Headhunters, The Police, Queen, Edgar Winter and some live Bob Marley, to name a few. All this cool, musical inspiration from one planet! I have the rock, the funk, the funky jazz fusion and the reggae going on through the spaceship’s sound system for light years! These players and their music, became the influences that put me in the mood to create an instrumental tune with an infectious, bouncy, tightly thumping, tasty bass and drums rhythm section. Over that smooth groove, I was inspired to put a couple of sweet harmonious guitars to carry the melody. To make it all flow with an energetic, upbeat vibe, I added a funky, peppy and crispy, rhythmic keyboard and some funky rhythm guitars. By the time I arrived at my friend’s little oasis on a small, yet to be charted exoplanet, the tune was recorded and finished in the spaceship’s studio and ready for a launch date!”

UNCLE ROY aka ROY LEONARD HERMAN, comes from Brooklyn, New York, an ancient place upon an outer tentacle of stars, within the Milky Way. Music, arts and sciences are a part of the culture and history of Brooklyn. The music culture is large and diversified. Uncle Roy was surrounded by all types of musical players.

The guitar was his musical vehicle of choice. In a quick story he tells, Uncle says: I was sitting in my friend’s living room with a few other budding musicians. We were playing the J.Geils Band’s gear!! Yes! The J.Geils Band’s gear! We had a friend who was a roadie for the band and he treated us to an amazing, inspiring moment! Uncle Roy says he was playing a black Les Paul, while his buddy was playing the custom pink bass the bass player in the J. Geil’s Band played. A friend turns around to Uncle Roy, who was all of 18 at the time, and says, “Six months ago you played like Stephen Stills! Now you sound like John McLaughlin!”

“I was getting into progressive rock and jazz fusion for a few years already at that time,” says Uncle Roy. “For the record, no one plays like John McLaughlin! But, it was one heck of a compliment for a young player to hear! John McLaughlin, Robert Fripp, Steve Howe, Steve Hackett, Allan Holdsworth and John Goodsall for example, were creating new and exciting electric guitar music and broadening the technical playing mechanics of playing the guitar. Each of them are great guitarists who have influenced a world of guitar players! And, they were all in my record collection to learn from every day!”

Musical influences of all kinds were becoming a part of Uncle Roy’s playing styles from the beginning. One day his spaceship left Brooklyn, New York and landed in southern California. He continued his musical education at the Dick Grove School of Music, Santa Monica College and UCLA extension, while performing and recording in southern California.

UNCLE ROY has released two EPs in 2019: The progressive instrumental EP, UNCLE ROYS SPACESHIPS’ “HOW DO WE GET TO EARTH?” and, an alternative rock/vocal EP called “SAVE THE UNIVERSE” by UNCLE ROY AND THE BAND FROM ANOTHER PLANET. Both are available on-line and as a CD. With musical comparisons written within the press reviews about those EP’s, comparing the sounds to David Bowie and Cheap Trick to King Crimson and Frank Zappa, UNCLE ROY’S ALIEN MUSIC certainly touches upon a universe of the cool genres of rock music that generations of Earthlings have loved!

Check out these album reviews:

In the near future, as a few cycles of the moon pass by, UNCLE ROYS SPACESHIP will be releasing more new music to the universe. So, watch the skies and stay tuned into your favorite places in the galaxy to hear music each day.

Here is a link to UNCLE ROYS SPACESHIP artist page at SPOTIFY:

The links to the track and artist at Apple: