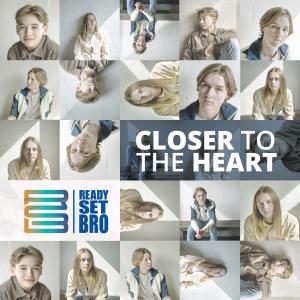 CALGARY, AB, CANADA, October 6, 2022 /EINPresswire.com/ — Following the tradition of musical brother bands like Hanson, the Jackson 5, the Jonas Brothers, and the Bee Gees, rising sensations Ready Set Bro have chosen to honor the legacy of legendary rock trio RUSH with a youthful and exuberant cover of the classic track “Closer To The Heart.”

Ready Set Bro’s energetic cover of “Closer To The Heart” was a genuine family affair, as it also features the boy’s dad Allen on drums, paying tribute to late RUSH drum legend Neil Peart. The single was released on the late drummer’s birthday, September 12th.

Ready Set Bro has been RUSH fans for most of their lives; during their long drives to and from school, dad Allen, a professional regional musician, would fill the car’s stereo system with his favorite classic rock anthems. As a result, the boys soon found themselves trying their best to replicate Neil Peart’s iconic drum parts in the backseat of their family car.

Tavyn cites Rush singer and bassist Geddy Lee as a huge influence, saying, “Every Canadian musician owes a debt of gratitude to RUSH.” Tavyn met his musical hero Lee at the National Music Center in the boy’s hometown of Calgary, a day he won’t soon forget.

Now, Ready Set Bro has parlayed those long-standing musical influences into a tight and infectious pop-rock cover of “Closer To The Heart” that is sure to delight and entertain fans from multiple generations while helping keep the legendary band’s music relevant for generations still to come.

In a nod to former teen stars like Tiffany and Debbie Gibson, who broke big by performing in malls, Ready Set Bro played their first U.S. show at the Opry Mills Mall in suburban Nashville.

Ready Set Bro has been featured in multiple media outlets, including Teen Kid’s News, Cochrane Radio, and the boys placed in the Top 10 (2nd) in Calgary’s “Live and Unsigned” competition, where they’ve been given a special invitation for a command repeat performance in their All-Star Competition in November 2022.

“Closer To The Heart” from Ready Set Bro is available now at https://linktr.ee/ReadySetBro.

To learn more about Ready Set Bro, visit their website at: http://readysetbroofficial.com/.