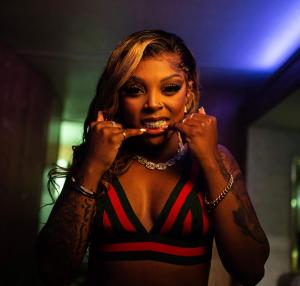 Chelly Flame Heats Up on New Single and Video “Hotter”

Chelly Flame on set at the “Bandz” video shoot

Atlanta’s Chelly Flame is primed to set the industry on fire with an infectious charisma and galvanizing swagger.

NEW YORK, NEW YORK, USA, October 6, 2022 /EINPresswire.com/ — As an artist, Chelly Flame is constantly evolving. From trap records to synth-heavy records, she has covered a wide range of genres in her nascent career. She takes on new challenges with each record, whether she’s experimenting with different production or testing out new flows. Despite this, she never sounds overwhelmed by a new challenge: her confidence translates from her personality to her records. In fact, it’s easy to argue that these challenges allow her to stay one step ahead of her competition.

On “Hotter,” Chelly’s second single of the year, she demonstrates exactly this. Over the TREETIME-produced beat, Chelly’s vocals float as she moves from bar to bar. This is just her second release with synth-heavy production, but it sounds like she’s already mastered her approach. Chelly has put together an impressively strong set of singles prior to the release of her debut album.

Directed by Jack Rottier, the video for “Hotter” transports listeners to a strobe-lit setting where Chelly shines with glamorous looks and unparalleled charisma. Jack has solidified a unique directing and editing in his work with Yeat (“Gët Busy,” “Mad Bout That,” and “Money Twërk”) but he adapts his style to fit Chelly’s image and persona, as his repeated use of close-up shots capture her glamor and confidence. Between this video and the video for “Bandz,” which was released in August, Chelly and Jack have proved that their chemistry creates stunning and entertaining videos.

Chelly’s last single and video, “Bandz,” has been extremely well-received: the track received a placement on HBO Max’s show “Rap Sh!t” and a post from Snoop Dogg on Instagram which has accumulated over 25 million views. Meanwhile, the video for “Hotter,” which is only her fourth official music video, has already secured airplay on BET. As Chelly lays down the stepping stones for a successful career, she continues to create buzz as an emerging artist and intends to take big strides before the year is over.

Tap in with Chelly Flame now.

Babygrande is an American independent record label and creative collective comprised of musicians, filmmakers, photographers, painters and writers. Founded in 2001 by Chuck Wilson, former Director of A&R at Priority Records/EMI, Babygrande has emerged as one of the premier independent labels operating today. Babygrande has a catalog of over 3000 albums, music videos, and online content that includes Hip-Hop, EDM, indie rock and everything in between. Babygrande has helped launch the careers of new artists and has nurtured the careers of seasoned veterans. As it heads towards its 25th Anniversary, Babygrande continues to focus on quality music and working with artists whose work ethic, craftsmanship, talent and sounds are superior.

Babygrande® is a registered trademark of Babygrande Global, Inc.