Country Artist, Chris Hollacheck, is Here with New Song ‘Remind Me Of You’. 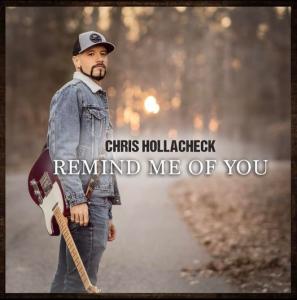 NASHVILLE, TENNESSEE, UNITED STATES, March 29, 2022 /EINPresswire.com/ — Emerging country music artist, Chris Hollacheck, is here with new music. His new song, Remind Me Of You, is about reminiscing about a past lover and wishing you could redo things in the past to still have a relationship with them. This single is another upbeat song, however it’s on a different side of the love spectrum from his previous release. Hollacheck’s music is artfully crafted so that audiences everywhere can relate to what he is singing about. This song, released March 18th, is available for the world to hear.

Born in New Bern, NC and raised down a 7 mile dirt road deep in the woods, Chris Hollacheck grew up in the kind of setting you’d picture being in a country song. His musical journey started very early when he learned cello at 3 years old. Chris has also played piano, trumpet, baritone, and bass guitar and sang and acted in numerous plays all before the age of 18. After graduating high school, he picked up guitar in college at the University of North Carolina Wilmington. It was there that he discovered his passion for songwriting and singing country music. Once he graduated college, he moved to Nashville. After a couple years of playing open mics and writer rounds and working odd jobs, Chris decided to leave Nashville and travel the country. He started venturing in Florida and then Texas, where he played more frequent shows and gained a diverse group of fans. During this time, he released his first radio single “Knotty Thing” in January 2019. After 2 years in Texas, he decided to move back to Nashville where he ended up taking his music further, with one of his songs reaching #2 on the Indie World Country Charts.

Chris Hollacheck’s new song is available everywhere you can listen to music, and there will be more hits coming from Hollacheck this year! Be sure to follow him on socials to keep up with all of his upcoming music!