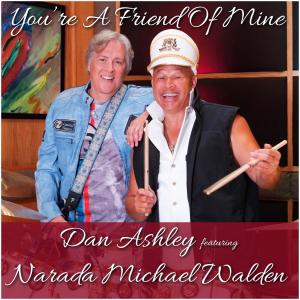 Together with Original Co-Writer and Grammy Winner NARADA MICHAEL WALDEN

SAN FRANCISCO, CA, USA, October 5, 2022 /EINPresswire.com/ — Accomplished singer DAN ASHLEY brings a distinctive voice and his unique life experience to the Bay Area music scene with his exceptional blend of Americana and rock and roll. Following the release of his full-length album Out There in 2021, DAN ASHLEY is excited to present his new single “YOU’RE A FRIEND OF MINE,” a duet with the legendary Grammy-award winning NARADA MICHAEL WALDEN (Whitney Houston, Mariah Carey, Aretha Franklin, Sting, George Michael) on October 21, 2022. Narada originally co-wrote the song with Jeffrey Cohen for Clarence Clemons and Jackson Browne, and both the song and music video featuring actress Daryl Hannah were a huge hit in 1985.

NARADA MICHAEL WALDEN recently brought the song to DAN ASHLEY thinking he would be a natural fit for an updated version of the material and recorded this new single with him at his own Tarpan Studios. As with the original version, Narada recorded drums and vocals for the track, and appears with Dan in the official music video. All proceeds from the single will be split between the NARADA MICHAEL WALDEN FOUNDATION and Dan Ashley’s own ROCK THE CASA FOUNDATION. “I’m very proud of my friendship and brotherhood with Dan ‘Dash’ Ashley!” says Narada. “I love Dan, he’s a great human being which inspired me to record this smash song as a new duet for the Narada Michael Walden Foundation and the Rock the CASA Foundation for kids!”

“YOU’RE A FRIEND OF MINE” also features Jackson Allen (guitar), Angeline Saris (bass), Katie Walden and Nate Soulsanger (backing vocals), and Dave Ellis (saxophone). Videographer Tommy Merry shot an official music video on the same day they recorded the track at Tarpan Studios, which also features Katie Walden and her twin sister Kelly Walden along with Dan and Narada. “Narada is one of my dearest friends and an incredibly warm-hearted and talented artist and producer,” says Dan. “I’m deeply grateful for our friendship over the past many years and I’m honored to record this amazing song with him to benefit not only Rock the CASA, but the Narada Michael Walden Foundation.”

As a vocalist, DAN ASHLEY has led his highly acclaimed band for many years, headlining notable venues and opening for such great artists as REO Speedwagon, Rick Springfield, Cheap Trick, Eddie Money, Patti LaBelle, Melissa Etheridge and more. He has also shared the stage with many other consummate performers over the years including Dionne Warwick, Neal Schon (Journey), Brad Gillis (Night Ranger), and multiple Grammy winner Narada Michael Walden, among many others. Dan is regularly asked to perform the National Anthem at a variety of events, including for the NBA, MLB, NCAA, and NHL, and also recently performed alongside headliner Night Ranger in Reno, NV, and Foghat at the Ojai Nest Fest Veterans Benefit in Ventura, CA!

With the release of his remarkable album Out There in October 2021, DAN ASHLEY shared in the joy, heartbreak, love, and loss that are part of our common humanity. From upbeat and driving rockers to gentle ballads, all with a classic Americana and rock music sensibility, listeners will find a variety of songs on the album. Backed by a group of extraordinary musicians who have played and toured with an impressive list of major artists, Out There is the result of a powerful collaboration with his long-time friend, music producer, and writing partner Bill Bentley. Also contributing to the release were well respected musicians such as internationally acclaimed soul artist Cornell “CC” Carter and longtime Y&T drummer Mike Vanderhule.

DAN ASHLEY has been around music and passionate about it his entire life, starting as a child with guitar and piano lessons, and then singing in the junior choir at his church in North Carolina. Always the storyteller, Dan Ashley is also a journalist and news anchor for ABC7 – KGO Bay Area TV, and in his 35 years on television he has reported on a wide range of issues and events that affect our lives. Dan has covered stories all over the Bay Area, the country, and the world, and has received many industry awards including the prestigious DuPont Columbia Award, two Edward R. Murrow Awards for excellence in journalism, and numerous Emmy Awards for Best Newscast and Individual Reporting.

Dan Ashley also created the non-profit Rock the CASA Foundation to raise money through an annual concert to benefit the CASA organization and other charities, and over the years the event has featured several internationally known bands and artists. Listen for his single “Redbud Road” from Out There on Highway 1 Radio!

To order or stream the new single “YOU’RE A FRIEND OF MINE” please visit: https://lnk.to/DanAndNarada

For more information about DAN ASHLEY and his new single please visit: www.danashleymusic.com