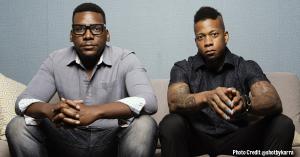 Banded Future has won two international awards for their powerful social justice song, but now they need votes to win a third.

This song is 400 plus years of struggle in 3 ½ minutes. It’s melodically simple and mesmerizing, yet lyrically blunt and powerful.”

LOS ANGELES, CA, UNITED STATES, March 29, 2022 /EINPresswire.com/ — Banded Future, a music duo composed of songwriters/producers Jericho Law and Zap Rath, have raised many eyebrows over the past year. And, their debut single “We Don’t Care” has particularly drawn a lot of attention in the music world. Since releasing the song in January of 2021, the duo has been named First Round Winners in the international John Lennon Songwriting Contest, Silver Award Winners in the international Telly Awards, and Quarterfinalists in the local California Music Video Awards. The duo also received a standing ovation after showcasing the “We Don’t Care” music video at the Silicon Valley African Film Festival.

Banded Future is gaining popularity because they make clean, fun music that everyone can listen to, and the duo has an unconventional approach that goes against the grain of modern hip hop. Their sound however is no surprise when you learn about their roots. Jericho’s background is in rock and soul music, while Zap’s background is in gospel and funk music. And somehow, they have fused this all together to create a hip hop mix that is very catchy and uniquely Californian. “We’d always talked about doing music together, but if we were going to do it, we were going to do it our way,” says Jericho Law. In addition to writing and producing their own music, the duo also plays over a dozen musical instruments combined.

“We Don’t Care” is actually the first song that Banded Future has ever released, and it is an emotional response to the racial conflict that gripped the United States in 2020. “This song is 400 plus years of struggle in 3 ½ minutes,” says Zap Rath, “It’s melodically simple and mesmerizing, yet lyrically blunt and powerful.” The composition highlights not only the struggle of African Americans throughout history, but also their resiliency, with references to influential entertainers like Dave Chappelle, Shonda Rhimes, and Akon who have used their platforms to make significant cultural impact.

As the duo prepares now for the Lennon Awards, people from all over the world can vote for Banded Future once a day, every day from April 1st to April 30th. Voters may join the Banded Future voter list and receive further instructions on how to vote by texting the word “Banded” to 888-910-0314. As a further incentive, one lucky voter will be chosen to win a new guitar from Epiphone, one of the contest sponsors. Additionally, four voters who have signed up for the Banded Future voter list will be chosen at random to win thank-you prizes from Banded Future.

Listeners can hear “We Don’t Care” on all major music streaming platforms and watch the award-winning music video on the Banded Future YouTube Channel. By texting 888-910-0314, you agree to receive marketing messages from Blackerberry Music, LLC. Message and data rates may apply.