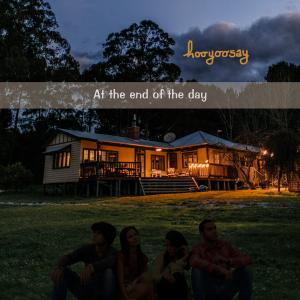 Hooyoosay Release New Blues-Pop-Rock Album, “At the End of the Day”

hooyoosay – “At the end of the day” – Album cover art

EUROPE, May 10, 2022 /EINPresswire.com/ — The coming into existence of hooyoosay actually is a coincidence.

Somewhere in a recording studio, some session players were waiting for the artist who had hired them.

When the artist messaged them he would be much later than planned, they started playing some cover songs to while away the time.

The studio engineer pressed ‘record’, and when eventually they found these recordings too good to be wasted, they later on finalized them and released them on the album “In dekay”, under the name hooyoosay.

As some of the players had their reasons for remaining anonymous, they simply decided that none of them would be credited.

Next, the idea emerged to turn hooyoosay into a continued project of releasing recordings by anonymous contributors, which undoubtedly is quite a unique concept.

Their latest release is “At the end of the day”, an album offering blues, pop, rock, singer-songwriter and Americana, in a number of cover songs as well as self-penned material.

The album opens with “It’s not easy”, a cover song, which hooyoosay have turned into a soulful rocker, the female vocalist definitely stealing the show.

It is remarkable how hooyoosay have made the cover songs their own.

The oustanding illustration of this, is their rendition of “Please go home”. This Rolling Stones original has gone through the incredible metamorphosis from a Bo Diddley inspired rock song to a delicate folky singer-songwriter acoustic ballad.

Neither has Chuck Berry’s “Come on” been carbon copied, but on the contrary been turned into a creative fun piece full of personality.

The cover version that stays closest to its original probably is “Let’s spend the night together”, the song’s message however brought in a more seductive and inviting way than it is in the rather screaming Stones original.

As for the self-written songs, “Tormented soul” appears on the album in two different versions, electric and acoustic. It’s hard to decide which one is to be preferred. The song’s fundamental ‘what now?’ cry is projected with a sense of aggressive frustration in the electric version, in the acoustic version however with more melancholy and resignation.

Classic blues with “I am the beggar” and “Good times bad times”, the former a hooyoosay original, displaying quite witty lyrics, the latter a cover song. Excellent performances, the harmonica absolutely shines.

The lyricism in “If no one” surely deserves attention. The dancing in the streets vibe of this funky tune might distract you from noticing the insightful tyrics, tackling all the challenges of society and the world, asking the right questions and urging for solutions.

Halfway through the album, “Olla Doo” is a killer instrumental from start to finish. A bluesy jam, showing off confidence and skill.

Energetic 80’s-90’s reminiscent pop-rock is being served with “All I do is call your name” and “Painkiller, kill the pain”. Solid and grooving rhythms, great melodies and harmonies, impeccable vocals and enticing arrangements.

“Then you walked away” closes the album. It is amazing how hooyoosay succeed in evoking the ‘so, that was it’ feeling implied by the title without the use of any lyrics, by a purely instrumental track, involving merely acoustic drums and percussion and a synth bassline.

To the enthusiasts of the blues-pop-rock spirit and sound of the past decades, “At the end of the day” by hooyoosay will certainly be strongly appealing.

So why not select your streaming platform here and give the album a listen.

Kenny Peters
hooyoosay
email us here
Visit us on social media:
Twitter
Other