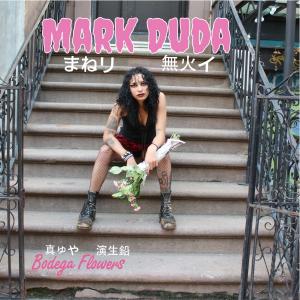 NEW YORK, NY, USA, July 11, 2022 /EINPresswire.com/ — MARK DUDA is a New York City-based artist and storyteller who sings, plays guitar, and writes great rock and roll songs. MARK DUDA shines on his debut full-length album BODEGA FLOWERS, which journalist and musician Phil Mitchum praises as a “transformative album from a generational songwriter.” Set for release July 29, 2022, BODEGA FLOWERS is an emotional journey packed with characters, experiences, and swagger straight from Manhattan’s lower east side. MARK DUDA seamlessly blends all of the NY flavors he’s soaked up over the years, from Dion to Lou Reed, The NY Dolls, the Dead Boys, and beyond, bringing his own signature update to the New York rock and roll sound and continuing to forge the musical identity he first introduced with his Month of Sundays EP from 2017.

Before recording 2017’s Month of Sundays, MARK DUDA gained wide recognition as the front man for New York hard rockers The Handful. The Handful have released four full-length albums since 2004, including Sons of Downtown in 2015, which was Mark’s first collaboration with Cheetah Chrome, and also features Mark in a duet with Cherie Currie of Runaways fame. Other releases with The Handful include Second Hand Smoke, Palmistry, and Wooden Indian on which Mark wrote, sang, and played guitar. Mark is also the lead vocalist for Rome, Italy-based band Mad City Rockers, who released the album Black Celebration in 2009, and handles guitar and vocals for contemporary heavy rockers August Fire. Mark continues to write and record for himself and with other groups.

BODEGA FLOWERS includes eleven brand new original MARK DUDA songs that are sure to make a fan of anyone who loves New York style rock and roll and is looking for something new to add to their rotation!