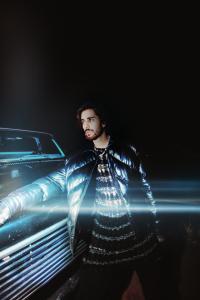 
DOWNEY, CALIFORNIA, UNITED STATES, June 2, 2022 /EINPresswire.com/ — In the modern era, the music industry has become an extremely monotonous and uninspired space wherein many artists are plagued by the curse of similarity. Few are the musicians who possess the ability to experiment, and even fewer are the artists who have the audacity to do so on a regular basis. Amidst the monotony in content, OTHRSYDE is rapidly coming up as one of the newest and most exciting artists to ever grace the stage. With his imaginative and daring take on music, OTHRSYDE is leading the new wave that is pushing for more Spanish language songs in the mainstream American music market.

This new wave is daring for many reasons. For starters, repeating what previous artists have done successfully has proven to be the historical formula for success for countless musicians. Secondly, Spanish is a very exclusive niche and the proportion of fans who understand and appreciate the language is definitely in the minority. As if these risks weren’t enough, OTHRSYDE is also adamant on making music in pure Latin, something that is unprecedented, daring, bold, and innovative. This is precisely why OTHRSYDE has caught the eyes of fans and critics alike.

As a Mexican/Cuban born in Los Angeles, Spanish has always come naturally to him, it being his second language. He has always goofily found himself conversing in ‘spanglish’ which is a mixture of English and Spanish – a ‘Chicano’ type Spanish if you will. It is his primary goal as an artist on the rise to glorify Spanish and Latin by incorporating them into his music, highlighting their cool and suave cultural impact, and bring forth a genre bending sound that transcends borders, hearts, and heritages. The manifestation of this ambitious aspiration has culminated in his latest single titled ‘BARRA LIBRE’ which he will be releasing alongside its music video.

Go to to find out more about OTHRSYDE and to discover more about his discography. For updates, remember to follow the artist on social media via the links provided down below.

OTHRSYDE is a Hispanic/American artist who is residing in Los Angeles. He has been making music ever since he was a teen. What makes his discography unique and compelling is his utter determination to break the mould and reinvent the mainstream American music industry by ensuring that Spanish and Latin get the recognition they deserve. For this very reason, OTHRSYDE has unveiled his latest venture in the sphere of music – his freshest single titled ‘BARRA LIBRE’ which is, at its heart, a true celebration of Latin and Spanish.

The new video for BARRA LIBRE features an atmosphere that could be mistaken for a 70s inspired Stanley Kubrick thriller. Playing into the theme of the song, which is essentially OTHRSYDE having the need to contact his mystery girl at the end of his nights out, in the video, one can see the struggle with which he makes his decisions and questions his actions and intentions every step of the way.