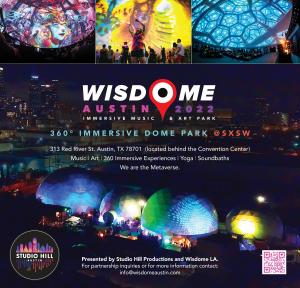 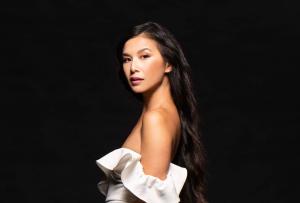 The large-scale event will serve as the official launch of the Grammy nominee’s own brand and her new facility, Studio Hill

“We’re very excited to bring the first dome park to Austin,” says Kaur. “The motto of the city is ‘Keep Austin Weird,’ and we’re going to do our part by featuring unique and incredible music and other exciting offerings in a way that you just can’t experience anywhere else.”

Wisdome 360 Immersive Dome Park will take place at 313 Red River Street, just next to the Austin Convention Center, and it will feature three large-scale domes with sound engineering provided by Studio Hill’s own audio team. Kaur herself will perform on March 17, and that same night will feature chart-topping musician and composer Kitt Wakeley, Eddy Kenzo, Matt B and so many others. In addition, Neil Collins of Breaking Hits will program an incredible event with artists such as Grammy-nominated artist, Shanice and Ali Caldwell, a finalist on The Voice. Kaur will also perform with two-time Grammy-winning singer Hila Plitmann songs from their recently Grammy-nominated album MYTHOLOGIES, composed by Danae Vlasse, on March 19 at the Show Dome.

“It’s a huge undertaking, but I think we’re going to blow people away with all of the magical programming we’ll feature every day,” says Kaur. “Wisdome LA and I share a similar ethos. We want to curate high-vibrational content that elevates our consciousness, nurtures our well-being and create positive and meaningful impact to the world.”

Wisdome 360 Immersive Dome Park will also serve as the official launch of Kaur’s own brand, Studio Hill Productions, as well as an announcement of the grand opening of her state-of-the-art Austin-based recording studio, Studio Hill. To serve as the facility’s chief engineer and studio manager, Kaur brought in her longtime engineer, Gerhard Joost, a 40-year audio recording veteran.

“There’s nobody I trust to be involved in this process more than Gerhard,” says Kaur. “We immediately recognized the brilliant work the original owners of the studio did to the place, but we’re implementing our own aesthetic and technological needs, and we’re committed to take the facility to another level.”

She adds, “Purchasing this studio has meant something very special to us all. My husband Hai and I are still new to Austin, and we’ve been so thrilled to be part of such a unique music scene. Already we’ve met so many amazing people who are the leaders in this industry. There’s a culture here that is unlike anywhere else in the world. Gerhard feels the same way. We all want to contribute to Austin, and we’re excited to see where this journey takes us.”

While working on plans for Wisdome 360 Immersive Dome Park and Studio Hill Studios, Kaur recently earned the first Grammy nomination of her career for Best Classical Solo Vocal Album for her work on Danaë Xanthe Vlasse’s new album, MYTHOLOGIES. Her nomination marks the first time ever that a female Vietnamese American was nominated for a Grammy Award in that category.

“I’m overjoyed to be nominated,” says Kaur. “MYTHOLOGIES was created during the pandemic, and even while we couldn’t be in a studio together, we had a very special time making this music. My girlfriends and dearest sisters, Hila Plitmann, who sang with me on the album, and Danaë Vlasse, who is the composer of this incredible music, poured all of our love and passion into it, and I think that’s the formula for success. To be nominated for a Grammy is validation of my spiritual theory that when you do good things and you do it from a place from your heart, only good things can come from it.”

She adds, “To be the first Vietnamese American singer to have ever been nominated in this category fills me with such pride. I love my heritage and my culture, and I love Vietnamese people. I want to continue to make my community proud, so I’m hoping for a win. And if not, I can truthfully say that it is already such a great honor and joy to have received a Grammy nomination.”

On the recording front, Kaur is working on new set of songs with longtime collaborator, Jon Anderson, the legendary singer of the rock band Yes (who was recently featured in Kaur’s PBS Special Front and Center Presents Sangeeta Kaur and Friends). “It’s always a treat to work with Jon, who is beyond brilliant,” says Kaur. “We have three songs completed, and we’re working on a fourth track right now. As soon as we’re finished with South by Southwest, I expect to be back in the studio to finish the song and continue writing my next release.”