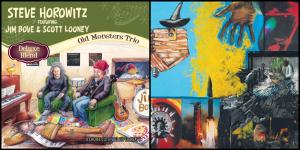 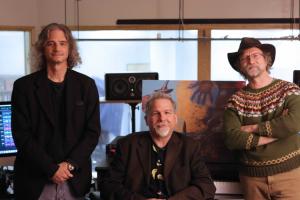 ASHEVILLE, NC, USA, May 25, 2022 /EINPresswire.com/ — A creator of odd but highly accessible sounds and a diverse and prolific musician, Steve Horowitz is perhaps best known for his original Score to the Academy Award Nominated film “Super Size Me.” The artist behind Twenty Nine albums of mind bending original music, a Grammy, Webby and Kid Screen award winning composer producer, he currently resides in San Francisco.

“Old Monsters Trio” is an album featuring Jim Bove on drums, Scott Looney on piano and features the compositions and bass playing of Steve Horowitz. Recorded January of 2022 at studio 43 in SF.

The band New Monsters recorded three albums, the first one featuring the music of Dan Plonsey. The second album recorded live at studio 55 in San Rafael, and the third album “Point Cloud.”

For this album Steve reached back into his substantial back catalog of twenty-nine albums from different periods in his career and brought them to the band to recompose, rearrange and reimagine. The theme of this recording is transformation, where old becomes new again.

The opening piece “Happy Eating Theme” is a reimagining of the theme from the academy award nominated indie hit documentary film “Super Size Me.” The second track “Aesthetic Nourishment’” is a trio version of a chamber piece written for the Red Desert Ensemble. “I Am No Ordinary Mortal,” the third cut, is a re-examination of a tune that was written for the television show “I Bet You Will” which ran on MTV. The fourth cut “Quasi-Eternity” is a re-orchestration of a graphic score from the 1990’s called “Party Of Four,” originally released on Steve’s third album San Francisco chronicled. “Bad Taste For High culture” the fourth cut on the album, is taken from a tune that Steve wrote in high school, a simple angular melody that he gave to Scott and he put new chords and new harmony to it. Number five “Strength Through Embarrassment” is another early 90s graphic score. “Wild Man The Throne God” is another tune from I Bet You Will, and the last piece on the album “The Expendable Man” is a trio exploration of concert music written for string quartet and trumpet.

And for the very first time, Steve is experimenting with releasing this album in a brand new way, in three different flavors. The first is the Deluxe Blend (Green) which features all the tracks and switches back and forth between monk-esq jazz and abstract contemporary compositions. The Jazzy Blend (Purple) features only the four jazzy cuts in an EP format. And the Abstract Blend (Orange) features only the contemporary compositions in EP format. Now listeners can experience the music from different angles and different points of view and listen based on taste and preference. Some people will only like the jazz stuff and some people will only like the abstract weird stuff and others will love them mixed together in a strange funky brew.

The album covers feature the artwork of Joseph Guillette also known as JTA, the amazing artist who has worked with Steve on most of his album covers since they met in early 2000s working together with Morgan’s Spurlock on “I Bet You Will” and “Super Size Me.”

The album “Mr. E,” recorded at the same time was made in homage to the amazing percussionist drummer madman and visionary Michael Evans who passed away tragically last year. The album features Michael’s voice from a phone machine message and several interviews mixed together into one twenty-two minute composition. The track features Steve Horowitz on bass Jim Bovy on drums Scott Looney on piano and Michael Evans spoken word.

The cover artwork is by Michael Evans. In the latter parts of his life Michael was working in visual art and multimedia and this piece featuring a log cabin, witch hat and other multimedia elements serves as the cover. “Mr. E” the title, refers to Mr. Evans and also to the mystery of life and the tragedy and mystery of his sudden death. The music features heavy use of percussion improvisation and music concrete to create a pastiche of wanton musical madness that is rich and satisfying to listen to.

All the album titles are in homage to the amazing percussionist drummer mad man and visionary Michael Evans who passed away tragically and suddenly last year. The names come from a phone machine message that was left by Mr Evans and all the profits from the sale of this album will go to the Michael Evans memorial fund at Roulette in NYC. Next Release is an album of Steve’s chamber music for the Red Desert Ensemble. Titled “Side Scroller,” it will be released worldwide in August 2022